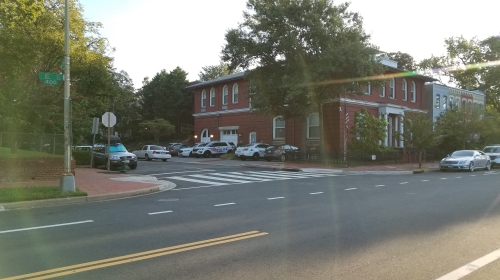 Last Thursday morning, a woman on her way to a workout class was violently assaulted near the MPD Substation at 500 E Street, SE.  The assault was not reported on the MPD listserv daily crime report, nor does it show up on the MPD crime map, nor was there an alert regarding crime of special interest to the community posted to listservs by police officials.

The woman, Lexi (whose last name is withheld by request) was on her way to her gym last Thursday just before 6:00am.  She was walking on the west side of 4th Street, SE, between D and E Streets, a block from the 1st District Substation.  Lexi said she is a  practiced urban dweller and was not wearing earphones or talking on her cell.

The sun had not risen and the block between D and E Streets was dark.  Mid-block, she stopped and bent over to take something out of her bag.  As she did so, Lexi saw someone coming at her from behind.  She stood up to turn around and felt an arm around her neck in a chokehold.  “I became unconscious fairly quickly, and when I came to, I was aware that he had grabbed my hair and was whacking my head on the bricks.  Then he punched me in the face three times and I started screaming, ‘Help! Help! Help!’  A lot of people came out – a woman said she called the police – I think others called the police.”

MPD came, she said, within minutes – “I would be shocked if it was more than 10.”

An ambulance arrived and took her vitals and administered first aid.  Lexi said, “There was a lot of blood.  They took me to the GW Hospital emergency room (for an eight hour visit).  I remember they said it was 6:40 when I checked in.  They gave me a CT Scan – there was no brain damage but I had a concussion and a broken nose and fractured maxilla.  I had a swollen face.  I still have two black eyes and a broken nose that will require surgery.”

She said the police took her name, social security number and asked what happened.  She couldn’t provide a description because of the way the attack occurred, other than she’s sure it was a man.

Lexi said she didn’t know whether he was waiting in the dark or had followed her; “I walk a lot in the city – I stay aware and am not oblivious to my surroundings.  I heard and saw nothing.”  She said the attack was “stealthy” – and thinks he ran toward the (Marion) park afterward.  Robbery did not appear to be the motive, since nothing was taken.

The police gave her husband a detective’s card with a phone number.  On Monday, she called the detective, who, she said, kept saying “it was a robbery or probably a robbery” and asked her if she was sure it wasn’t a robbery.  She says it wasn’t – that it was “awfully violent,” and that her assailant could have just grabbed her bag (which contained nothing of value except her cell phone).  The detective later reported that the two video cameras on the block showed nothing, and concluded their interaction with, “If you come up with witnesses, let me know.”

Lexi says she is “really concerned that the community has no information about this.”   She says, “This is my community – also my friends’ community.  We think this is a fairly safe place to live.  A lot of people walk around.  I would love it if anyone who saw something came forward.  There’s no info out there – MPD is not asking.  If the guy is still out there, we want to catch him.  I’m very very lucky it wasn’t more serious.”

CHC asked her to describe her state of mind.  She said she has “lots of ups and downs and I’m afraid to leave the house on my own.”  She says,” I have been very very independent and I’m anxious to get back to that.  I hate for this guy to have changed me – to take something important away from me.  I’m working on it.  I’m hoping someone saw something.”

CHC reached out to 1st District Commander Morgan Kane to ask why the assault hadn’t shown up on the MPD listserv daily crime report or the MPD crime map.  Kane says that only crimes that meet the national criteria for the FBI’s Uniform Crime Report Program are posted on these two venues.  Since this assault did not involve a deadly weapon – even though it was a terribly violent one – it did not meet those criteria.  (It’s not clear why these criteria can’t be altered locally for the purposes of informing the community and still maintained for the national reports.)

Kane said what should have happened (but which apparently did not) was a police official’s alert to the community listservs that a crime of significant interest to the community had occurred.  She cited the example of the notice posted by officials to listservs regarding the attempted Vespa scooter-jacking at Potomac and Pennsylvania Avenues last Saturday.  Kane said she would check to see if a police official’s notice on the assault had been posted.  CHC asked her to find out how it had fallen through the cracks if it had not.

Kane did not respond by press time, but CHC noted that shortly after its initial query to Commander Kane and Captain Knutson of the 1st District, and before Kane reached out to CHC, MPD posted the following message to the MPD listserv followers – a week after the crime:

Any persons that may have witnessed the assault or possess video footage of the offense are asked to contact the First District Detective’s Office on (202) 299-2025, or our Command Information Center at (202) 727-9099.

This case continues to be investigated by the First District Detectives Office.”

Councilmember Charles Allen said he was reaching out to the victim directly and that he had heard concerns regarding MPD and some other issues regarding this attack.

It is worth noting that crime alerts not only solicit information that can prove vital in solving a crime, they also let members of the community know of encounters that may influence residents’ decisions of where to travel, when, and how to do it.  Many people would probably be surprised to learn that such a violent assault that took place so close to the police station.