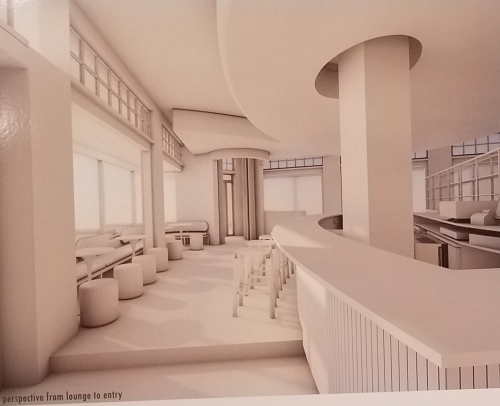 This is the perspective from the lounge to the entry, on the corner of Pennsylvania Avenue, and 11th Street, SE.  The illustration shows the layout, not how the venue will look after the decorators get to work.

Likewise for the bar and lounge.

The restaurant will feature an open kitchen.

Here’s the floor plan for Emilie’s.  (The name was pays homage to the late benefactor of Tien’s family when they first moved to the US after the Vietnamese War and to his fiancé.

The restaurant is designed around the concept of dim sum and shared plates.  Guests may order from a menu or from the carts of small plate daily specials circulating through the dining area on carts – “tableside” dining.  The menu will rotate daily, and feature products from a local community of producers, farmers and ranchers.  The owners hope to open the restaurant in the spring of 2019.  (The Frager’s Building is on track for completion in March, 2019.)

Tien is partnering with restaurant veterans Sam Shoja (Jinja Raman Bar) and Arris Noble in this new venture.  Tien is current co-owner of the highly acclaimed Himitsu in Petworth.  Capitol Hill’s latest celebrity chef, Tien is a veteran of Iron Chef Gauntlet and Finalist in the James Beard Foundation Rising Star Chef of the Year, 2018.  He has cooked for Chef Aaron Silverstein’s Pineapple and Pearls and Chef Jose Andres’ Oyamel, among others.