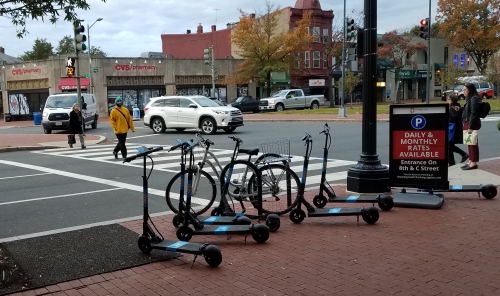 A bevy of e-scooters at the corner of 7th Street and Pennsylvania Avenue, SE

Companies providing those multi-colored dockless bikes have left the city after a pilot program which started in September of 2017, citing regulations too burdensome to make business possible.  In the aftermath, residents have turned to electric scooters and e-bikes as their preferred alternative mode of urban travel.

Now the DC Department of Transportation (DDOT) has proposed regulations to permit e-scooter and e-bikes to operate in the city during 2019, and two companies – Bird and Lime – say the regulations make doing business impossible for companies providing dockless vehicles. See here: https://bit.ly/2RVrZjY

Currently, five private dockless vehicle companies operate in the city.  Jump (owned by Uber) operates electric pedal assist bicycles but is developing an e-scooter to tap into that market.  Four other companies – Skip, Bird, Lime, and Lyft – currently operate up to 400 e-scooters each.  Another company, Spin (which was just bought by Ford Motors), launched as a bicycle operator, but is moving toward e-scooters, provides scooter service 13 cities.  (Muving, a company that offers two-person mo-peds is reported to be negotiating with the city to provide service here.  The company is already in operation in Atlanta.)

E-scooter companies are pushing back on the proposed regs, calling them too burdensome – objecting especially the 600 cap per company on initial deployment of e-scooters and/or e-bikes (i.e., 600 each) and the proposed 10mph speed limit on scooters.  (The scooters are capable of 15 mph while e-bikes can travel at 20 mph.  Muvings’ mo-peds have a top speed of 30 mph.)

On Tuesday night, ANC6B weighed in on the regs, and voted 9 – 0 – 0  to recommend that DDOT raise the cap on the 2019 dockless vehicles launch in January from the proposed 600 to 1,000, to oppose the 10 mph speed limit on scooters, and to require scooters to use bike lanes wherever they exist, rather than the sidewalk.  Currently, it is legal to ride an e-scooter or bicycle on sidewalks, except in the central business district. (See map here: https://bit.ly/2PqK4sr)

Likewise, on Wednesday night, at its November meeting, ANC6C agreed with two main objections to the proposed regulations, voting 5- 0 to recommend that DDOT eliminate the speed limit on e-scooters and raising the initial cap of 600 e-vehicles.  The ANC acknowledged that a faster speed limit for e-scooters presented a danger on sidewalks, but noted that a lower speed limit was a disincentive to use streets and bike lanes.

The city invites feedback on the plan before November 26.  To submit written comments go to https://ddot.dc.gov/release/public-comment-period-opens-new-permit-process-dockless-vehicles