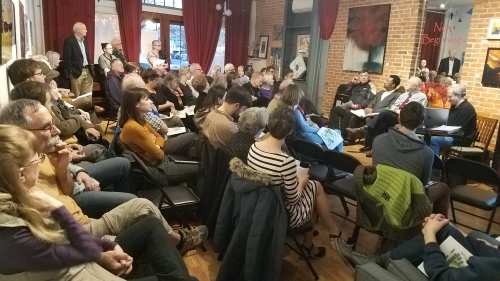 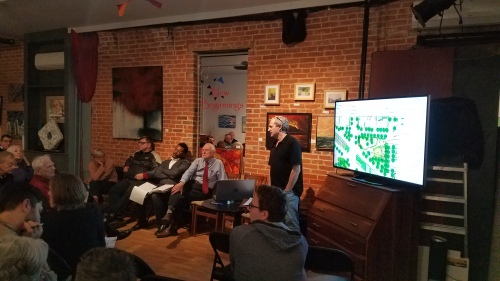 Latest DGS design concept for Eastern Market Metro Plaza.  ANC6B has uploaded a copy on the ANC6B website, accessible here: https://anc6b.org/wp-content/uploads/2019/03/2019-03-06_CFA-Presentation_Final.pdf The core projections of what is being proposed for the parcel 1 park are on pages 25-26 of the document.

The Dept. of General Services (DGS) design team will present its final concept for the Metro Plaza Park to the community on April 3rd.  The plan calls for breaking ground on Parcel 1 where the playground is located, with the goal of opening it in the summer of 2020.  Last night, ANC6B’s Livable Community Taskforce – chaired by Commissioner Steve Holtzman – met to make sure the park’s users have input to make the park work for residents. Holtzman said that the design process had been flawed – especially regarding engaging residents adjacent to the park and those who would use it most –  and that tonight’s meeting was a last minute effort to address their pragmatic and functional concerns.

Chief among those concerns were how to activate the park – largely as a way to address existing safety concerns – and how to maintain it.  Long time park supporter and activist Carl Reeverts explained how over the years, many efforts to rally neighbors to maintain the park ended in failure, owing to a loss of enthusiasm and lack of community leadership.

Holtzman noted that there is nothing in the public plan about maintenance and security, and there was broad consensus in the group to ask the city to provide funding for maintenance and upkeep.  A suggestion to establish a ”Friends of the Park” organization elicited a show of hands from some 15 attendees willing to participate.

The main way to activate the park will be the fenced children’s playground and splash pad on the north side of Parcel 1.  The playground will be located in an area where substance abusers and drug dealers currently hang out and sometimes harass passersby – especially women – as they walk through the park.

Suggestions on how to improve the playground included seating for parents who want to watch their children, a shade structure or tree canopy, and an entrance other than off the main walkway.

Holtzman acknowledged that a playground is not the sole answer to activating the park, and many who attended the meeting voiced support for a dog park or dog run.  Holtzman asked those interested to form a committee to make specific recommendations to the Taskforce.

Other suggestions included adding more tables and chairs, chess tables, a community garden, more green space, a water fountain and spigot, and benches and trees to line the diagonal walk.

A discussion of using the park for special events produced suggestions including movie nights, bands, and other events, but also raised the question of how much event space would be used, given the lack of resident interest in using Lincoln Park for events.

Several residents expressed the desire to just get the project started and finished – adding that the result may not be perfect, but it’s better than what we have now.  Holtzman assured the group that tonight’s meeting would not interfere with the project’s timeline.

The Taskforce will carry the resident’s concerns and suggestions to the Eastern Market Metro Plaza Advisory Group, appointed by DGS to provide input on behalf of the community.  ANC6B has been concerned that the Advisory Group did not function well as a venue for residents and park users to provide input into the process.  ANC6B Chair Chander Jayaraman charged the Liveabilty Taskforce with being ANC6B’s vehicle for conveying resident input to DGS.