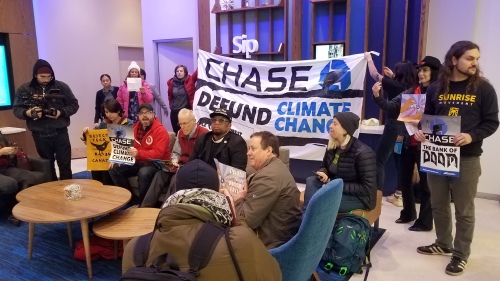 The occupation.  (seated, left of center, Bill McKibben and the Reverend Lennox Yearwood) More photos below.

The occupation started about 11:30am and marked the launch of a national protest effort against banks and financial organizations who directly or indirectly fund fossil fuel companies.  The event was one of three today, and was held in conjunction with the environmental activist group Fire Drill Friday, headed up by Jane Fonda.  Fonda has led a series of Friday demonstrations on Capitol Hill to demand action to address the climate emergency.  Today marked the final day in the series of demonstrations at the Capitol.  Fonda and a contingent of activists came from the Capitol  to the Chase Bank outlet to support McKibben and Yearwood’s group inside.

The protest ended after several hours, with the arrest of ten people who were charged with trespassing – refusing to leave the bank after being warned by MPD.  They included 350.0rg founder Bill McKibben; Friends of the Earth Vice President, Liz Butler; Hip Hop Caucus Director, Lennox Yearwood; and Divest-Invest Director, Clara Vondrich.

305, named after 350 parts per million – the safe concentration of carbon dioxide in the atmosphere, was founded in 2008 by a group of university friends in the United States along with McKibben, who wrote one of the first books on global warming for the general public, with the goal of building a global climate movement.  McKibben said that on Monday, 350 would announce a date this spring for a national protest against financial organizations that fund fossil fuels.

Yearwood is a minister and community activist who currently serves as President of the Hip Hop Caucus, a national nonprofit, nonpartisan organization that empowers young people to participate in elections, policy making and service projects.

Here’s a video of remarks by McKibben inside the bank. 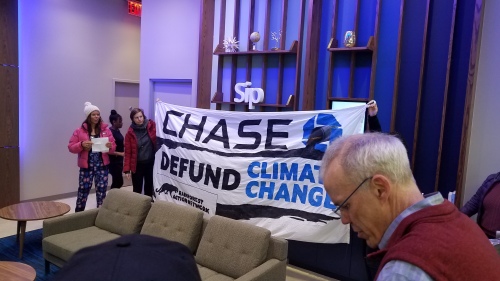 The protest. McKibben at right. 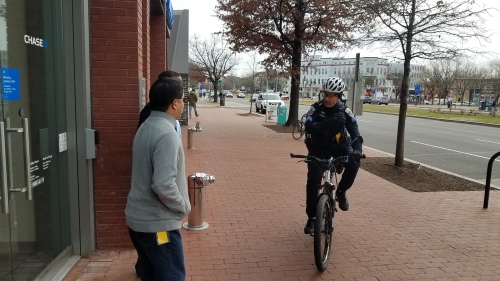 The cops were called. 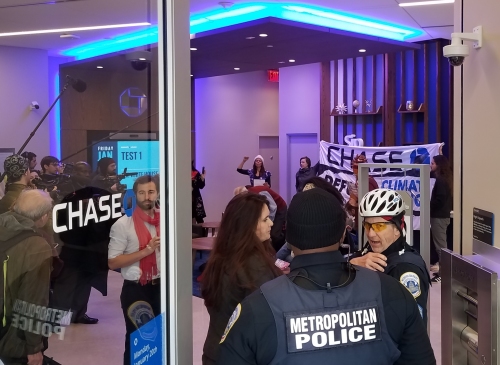 And address the situation. 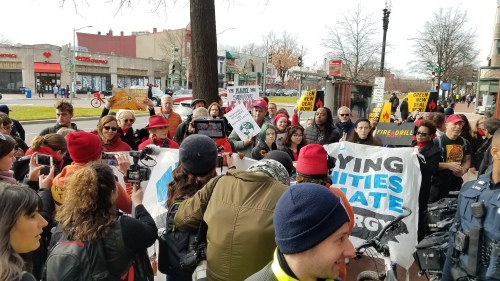 Jane Fonda (left, center, in red) arrives with some 100 activists from the demonstration on the East Front of the US Capitol.  They support the protest from outside the bank. 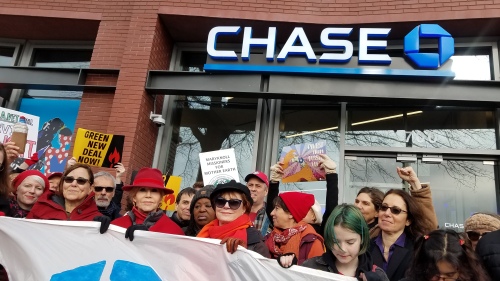 Fonda and supporters before returning to the Capitol Grounds.