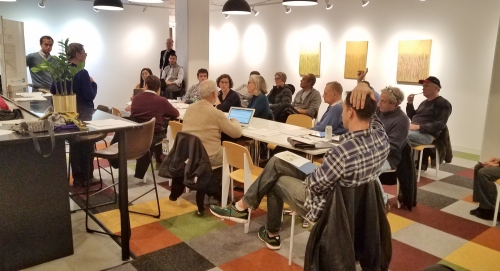 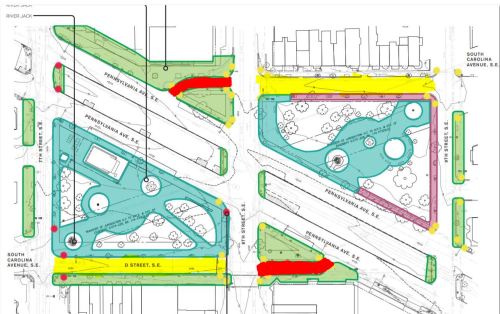 Last night, ANC6 B’s Transportation Committee supported proposed changes in the traffic patterns around Eastern Market Metro Plaza, voting to endorse the city’s plan to close the two “slip lanes” (one in front of Trader Joe’s and the other in front of Dunkin’ Donuts) which permit drivers on 8th Street and on D Street on either side of Metro Plaza to access Pennsylvania Avenue and thereby avoid the stoplights at 8th and Pennsylvania Avenue.

The ANC refused to support the city’s plan to reverse the flow of vehicular traffic on the two D Streets.

The city’s rationale for closing the slip lanes and reversing the flow of traffic on the two D Streets, according to Department of General Service’s Cassidy Mullen, has several parts: closing the two slip lanes eliminates opportunities for pedestrians and vehicles to meet and is in the interest of pedestrian safety, the two triangular parcels which the slip lanes cut through “don’t serve much purpose” and could be reprogrammed with landscaping and outdoor seating, and finally, reversing the flow of traffic between Street on the two D Streets prevents vehicles from turning right or left onto 8th Street which increases congestion at those intersections.

Committee chair Kirsten Oldenburg supported closing the slip lanes, saying that the redesign of the Eastern Market Metro Plaza is all about drawing pedestrians and that from her perspective, the goal of pedestrian safety at the expense of vehicular experience is a tradeoff worth making.  Mullen said that in an on-line survey, 2/3 of the 700 respondents supported the closure of the slip lanes.

There was substantial opposition to reversing the flow of traffic on the two D Streets which many saw as creating more problems than it purported to solve.

The motion that the ANC NOT support the reversal of traffic on D Street (on either side of the Metro Plaza) passed by a vote of 11 – 0 with 3 abstentions.

The city’s plan anticipates carving out a two-car long drop off space on Pennsylvania Avenue to accommodate Trader Joe’s and the adjacent daycare center.

These recommendations will be forwarded to the full ANC for consideration at its monthly meeting on January 14.  The recommendations of the ANC are not binding on the city, but city agencies are required to “give great weight” to ANC opinions. Whether or not the Department of Transportation will accede to the ANC’s recommendations on this matter remains to be seen.  In the past, on some occasions, DDOT has had little regard for community input.