A rendering of the view of the proposed project at 1333 M Street, SE, seen from Water Street. 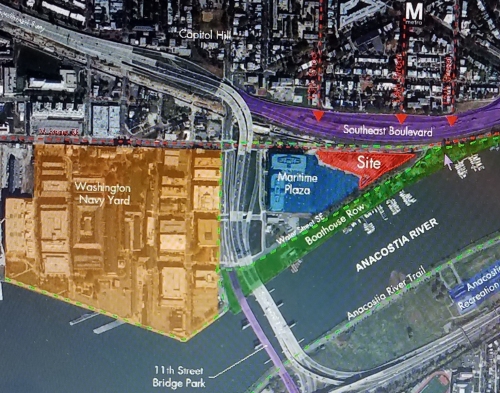 The site is east of Washington Navy Yard, adjacent to Maritime Plaza. 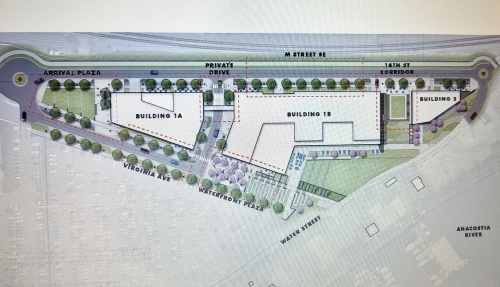 And this is the footprint.

Tuesday night, ANC6B voted to support Felice Development Group’s resurrection of a dormant residential/retail project on the banks of the Anacostia River near Boat House Row.  The 6 – 0 – 2  vote was to support of the developer’s plan to ask the DC Zoning commission to initiate  the Planned Unit Development (PUD) process for the project.  The Zoning Commission has scheduled that meeting for later this month.  (Developers of a PUD project apply to the Zoning Commission for a change in zoning that would allow greater density, height, and mass than the current zoning for the site would allow.  If approved, it is usually with a package of benefits or amenities for the community, provided by the developer.)

A similar project, introduced in 2015 by developer Crescent Heights, was deferred in 2017,“stymied by overdevelopment” according to the developer, who at the time sought and received at two year extension of the PUD.  http://bit.ly/2kTQKxy

According to a representative of GTM Architects, the revival of the 2015 – 2017 project is similar to that plan but with an improved design and development (and 1/3 larger) program.

The new plan anticipates three buildings – two of the larger buildings – each 13 stories and 130 feet tall, will be connected by a bridge.  The smaller third building will stand alone with nine stories at 92 feet tall.

The total project will amount to 791,000 square feet, with 900 residential units and two levels of below grade parking.  Ten percent of the units will be affordable – 2% more than is required under Inclusionary Zoning requirements.

The project will provide 45,000 square feet of retail space, with ground floor retail facing M Street.  A 25 foot slope of the site toward the river will afford two levels on retail on that side.  According to Biz Now, the developer will fill much of the retail space with a food hall.

ANC6B Commissioner and Chair of the ANC’s Planning and Zoning Committee Corey Holman said that the ANC would appoint a working group to discuss community benefits and amenities, as the project moves forward.  Holman noted that the buildings will change the present view-scape dramatically and raises questions about that value to the community.  He said the Planning and Zoning Committee would solicit the input of constituents on benefits, as well as on how a Memorandum of Understanding regarding construction mitigation should be structured. He also said his Committee wants to see additional renderings of the view from L Street and from the river and the south side of the river, as well as shadow studies.

A company representative cited a number of “community benefits” which the project will provide by developing beyond what the department of transportation requires in terms of infrastructure improvements.  She noted that providing 2% more affordable housing than the 8% requirement was also a public benefit.