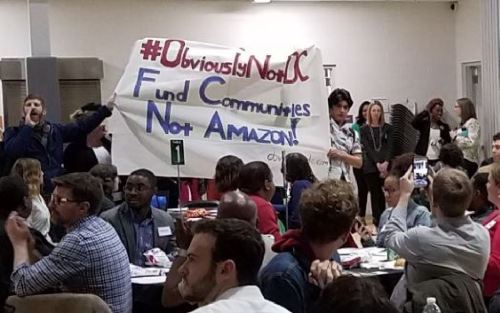 A group of activists protesting the Mayor’s incentives for Amazon’s new second HQ take their objection directly to the Mayor. 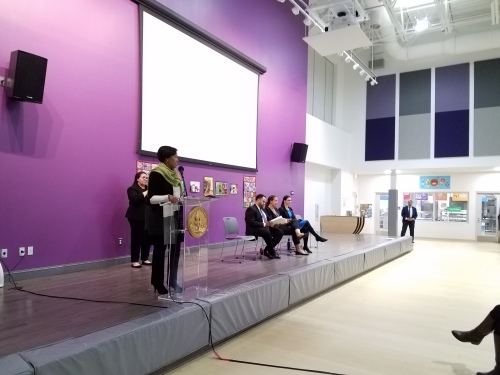 Boswer took the interruption in stride. 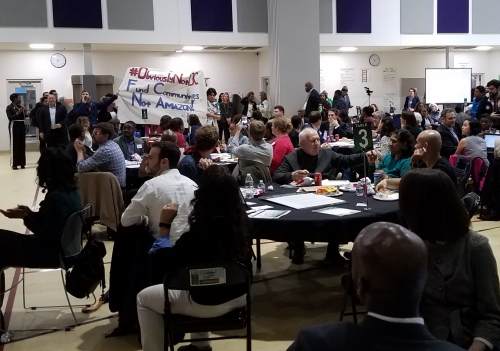 Here’s a wider view of the protest. 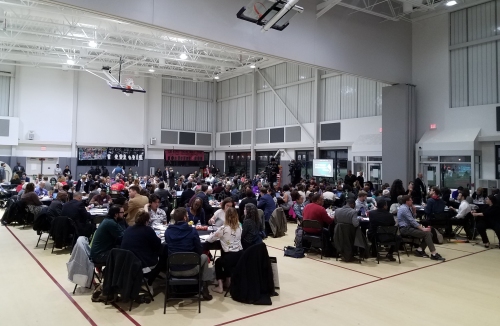 More than 200 residents showed up to offer input on shaping the FY 2019 budget.

Activists disrupted Mayor Bowser’s budget engagement forum at Watkins School last Thursday.  The group who – according to City Paper** – is affiliated with the Metro DC Democratic Socialists of America were protesting Mayor Bower’s secret package of incentives offered to lure Amazon to DC as the site of its second headquarters.  Incentives they say could be better spent on housing and education.

Bowser had begun to address the more than 200 residents who were participating in what she called the effort of “helping us balance the budget” when protestors sitting near the stage where Bowser was speaking, rose and unfolded a sign that said “Fund Communities Not AMAZON!” and the hashtag “#ObviouslyNotDC”. ***

Unfazed by the interruption and chants of “Money for schools – Money for housing,” Bowser continued to speak, until she broke off and repeatedly said “thank you” as security people escorted the group out of the gymnasium.  MPD Chief of Police Peter Newsham was on hand, though it was unclear whether this was the only budget forum he’d attended.

The forum was the second of three community meetings designed to give residents an opportunity to share their values and priorities with the Mayor before the FY 2019 budget is finalized.  Participants received an overview of the current FY 2018 budget and participated in small group discussions about how funds should be allocated.  Residents were asked to allocate $100 among the following fields: Education, Public Safety, Jobs and Economic Opportunity, Housing, Government Operations, and Health and Human Services.

Total dollars allocated to those fields in the current FY 2018 are as follows:

***Here’s a link to the protest group’s Obviously Not DC’s website:  http://bit.ly/2HLI0o0